Home News Dancehall news 16 things Alkaline might do for 2016

Do you remember when Alkaline was just making his name in music?

And do you remember how from then to now he keeps mentioning the year 2016 in songs such as Move Mountains, Touch You, and Things Take Time? He even has a countdown to the year 2016 on his website! It’s rather ominous, but we are all curious about what he has up his sleeve.

Maybe for the New Year Alkaline will allow his fans to see him more clearly (or vice versa) by taking out the black contacts. Unless of course you believe they are actually tattooed black. We’ll see… [EDIT: this one seems to have now happened a tad early] 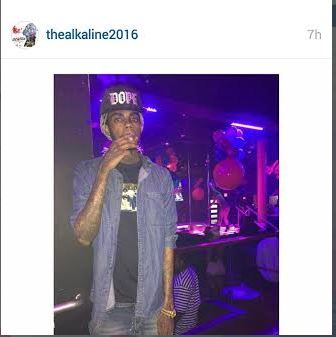 Full time. He has been hinting at it for long enough with mixtapes and EPs. We wouldn’t be surprised if he drops an album on January 1 entitled Vendetta 2016.

This is also highly likely. Even without a debut album so far, he definitely has enough music in circulation to pull off a successful tour. Recent hits like Champion Boy, Side Chick and Object Bingo almost make us forget that he is not allowed in some Caribbean countries.

Well…. that could happen, but with all his vendetta girls, germs, and side chicks, who would he get married to?

Same options as above apply. Then again, who says there aren’t some vendetta kids running around that we (or even they) don’t know about?

This of course would be pretty pointless, since the world is waiting to see if he really can have the same influence as Vybz Kartel on Dancehall music. Some believe he does, but others are in doubt, since he hasn’t yet gone through (and refuses to go through) the ‘Clash at Sting’ ritual.

‘If #1 is wrong, ‘ink’ could seep through his eyes and, well, that would be unfortunate… Moving on….

LOL! Gospel music on Fleek. But really, it wouldn’t be a bad idea.  He would have a great testimony and save many souls. Plus, Jesus seems to be touching everyone these days… Alkalove? Brother Bartley?

Or car. Or some other thing that celebrities and Champion Boys and the like purchase to show us the depth of the money they are swimming in.

We’ve been hearing that he was pursuing a first degree in media and communication at UWI for a while now. It would be a nice if he was to finish it. Even if he doesn’t necessarily need it, at least he could say he outdid Vybz Kartel in that one area.

This would also be a brilliant way for him to capitalize on his success. His V Family tees are OK, but why not go all the way? His fans would just love spending their savings on some Vendetta jeans, shoes, glasses, and … um…masks?

…with a secret that he has been keeping from all of us this time. Or a Usain Bolt diss track. It could be about anything, any aspect of his life. I don’t know. I’m not even trying to guess. I want to be just as surprised as you when he reveals it.

Actually, he outlined a lot of the challenges that Jamaica face in Weh we ago Do. What if he actually decides to do something about them? And why not, he would have the best Political Party/parties.

For what exactly? We can’t say for sure. But what if songs like Love Doctor and Object Bingo are confessions of actual crimes, and the law catches up with him next year? That would be sad, but then he could do a few collabs with Addi. Or a real clash?

This is a disappointing possibility, but he can very likely just continue doing his thing, one hit single at a time, paying no special attention to the year 2016.

16.   Start hinting at another year in his music

Also very disappointing. Imagine if at the beginning of the first song he drops for 2016 you hear “two thousand and nineteen!”

If you’ve made it this far, you should’ve realised that all of this is a joke and not to be taken seriously at all. [EDIT: Except for maybe #1 which seems to have happened.]