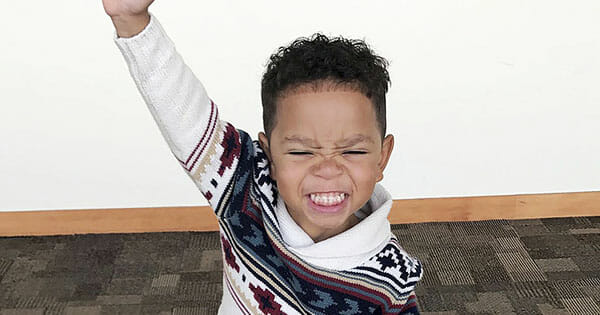 Nationwide — Michael Brown, a 3-year-old boy who spent more than two years in foster care, is an internet sensation after photos of him celebrating his recent adoption went viral on social media. He was adopted this past Tuesday morning in Phoenix, Arizona by Tara Montgomery, a single mom with three other kids.

Michael had been living with the Montgomery family since February 2015, but he had yet to be formally adopted and the initial plan was that he would only be there temporarily.
“His original case plan was reunification with his ‘bio-mom.’ When that plan failed, a new plan was set,” his new mom says.

And when the adoption become final and official, Michael really celebrated. So they took pictures and posted them on social media. Within just three days, the photos had been shared on social media more than 50,000 times.

“The photos are the definition of his personality,” Montgomery stated. “He couldn’t help but let everyone know that he was being adopted today. We are so happy to have Michael in our lives.” She adds that she hopes the photos of happy little Michael encourage others families think about adopting.

“If you are thinking about it, just do it. The impact you are making will last a lifetime on the child,” Montgomery said.

Watch the video below: