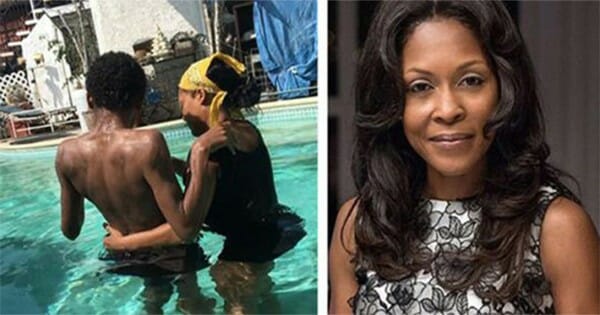 Nationwide — More than being an iconic actress, Monica Calhoun is also a caring mother to her son who is blind. A video that she posted of her bonding moment with her son in a swimming pool in 2018 has recently been resurfacing.

The 50-year old actress has been known for her roles in the films The Players Club, Bagdad Cafe, The Best Man, and its sequel The Best Man Holiday. She also gives her best in her role as a mother and dedicates most of her time to taking care of her 21-year-old son, who happens to be blind
She regularly shares to her thousands of followers on social media her life as a mother to her son. Her followers love to see how loving she is to her son, who seems to enjoy music a lot. One of her posts on Instagram captured the hearts of many.

In 2018, she shared a video of herself teaching her son how to float on his back in a swimming pool. People were touched on how her son trusted her unconditionally — that he knows his mother always has his back literally and figuratively.

“There is no greater bond than the bond between mother and child,” one wrote.

“You are so dope, God blessed you with an angel of his very own to love,” another commented.

What’s more, having a blind loved one is not new to Monica. Her brother, whom she grew up with, was also born blind.