Lawrence, KS — Albert N. Wilson, a former University of Kansas student, has been sentenced to 12 years in prison and a lifetime of probation after being convicted by an all-white jury of raping a white teen girl. But he says they only kissed, and never had sex. 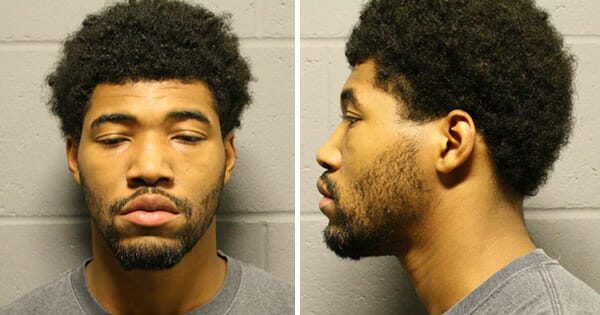 In September 2016, then 20-year old Wilson was with a friend when he went to a bar where he met a girl, who was 17-years old at the time. She was visiting her cousin who attended KU. Both underage, Wilson used a friend’s ID to get into the bar, while the young woman and her cousin weren’t carded.

Both parties agreed they met at a popular college spot called Jayhawk Cafe while they were dancing. Wilson then kissed the girl while he allegedly lifted up her skirt. Without knowing each other’s ages, Wilson invited the girl to his place, which was only walking distance from the bar.

The young woman claimed Wilson raped her at his place. On the other hand, Wilson told a different story. He testified that the girl “didn’t seem intoxicated at all.” He admitted that they kissed and engaged in other sexual acts, but he said they never had sexual intercourse.

According to the Kansas Bureau of Investigation, Wilson’s DNA was found on the girl’s chest through his saliva when he kissed her there. However, the DNA Test revealed that no DNA from seminal fluid was found at all. Swabs were collected from the girl after she went to a local hospital the day after the incident. Photos of her inner thigh also showed bruises in the area.

During the trial, Wilson initially claimed he couldn’t remember the details of what happened that night, but he felt that the police were against him at that time because of his race.

“I don’t know how to explain this, but I come from a different background than you, ma’am,” said Wilson to Judge Sally Pokorny, who is white. “…I just felt like the police [were] against me at that point.”

Forrest Lowry, Wilson’s court-appointed lawyer, argued that his client is not someone who would do the things that are being made in allegations against him. Wilson, who is now 23-years old, was a former Wichita Southeast High School football player and an associate degree holder who aspires to be a sports journalist. He had no criminal record.

“It was a chance meeting. Obviously, my client misread what was going on,” Lowry said in court. “If there was ever a case that deserved a departure of any kind, I think this is it.”

After a 6-hour deliberation, the all-white jury decided to convict Wilson of rape and gave him the reported “lowest end of what’s called for by Kansas sentencing guidelines for rape.”

The verdict has caused an uproar with many people asking multiple questions about the woman’s story, especially since a surveillance video showed the girl was consenting as they engage with one another and they were only at Wilson’s place for five minutes before returning to the bar. Some are also questioning Wilson’s lengthy sentence compared to other convicted rapists.

A website at FreeAlbertWilson.com has been created by his supporters to find out the truth behind the case.