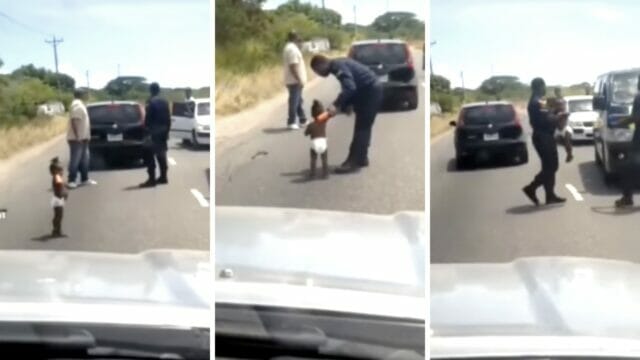 Parents of a young child are thanking a set of alert motorists and members of the Mounted Troop Division in the Jamaica Constabulary Force for the steps that they took to rescue the toddler, who was found wandering across a busy road in a section of Spanish Town, St Catherine on Monday.

Reports are that the team of police officers was passing a premises in the old capital when they saw the child, wearing only a diaper, walking around on the busy roadway unsupervised.

Police officers and motorists stopped and went to secure the child.

Reports are that as the police were making checks to find out where the child was from, the toddler’s guardian was seen rushing toward the child and explaining that they had just turned to close the back door to their house only to realise that the child had slipped out.

The child was returned to the parents who had nothing but high praises for the team of officers who were all too eager to remind residents of their motto to serve and protect.

But, while the parents were heaping praise on officers, some social media users were criticising the guardians of the child, saying that they could be charged.