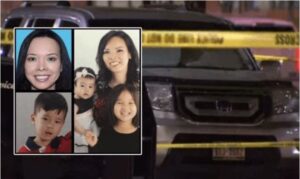 A Texas mom mysteriously died while out running errands with her three children.

Authorities did not find the woman and the children until 3 days following her death. The kids whose ages range between 1 and 5 were found dehydrated but otherwise healthy. They were transported to a nearby hospital where they are being treated for non-life threatening injuries.

39-year-old Woo had no past medical history and medical examiners said they found no signs of trauma.

Woo’s family said that she is an amazing mother and would never put her children in harms way.

“She’s a loving mother, she’s like a lioness, she would fight for her kids, she would never hurt her kids at all,” Brandon Woo, her husband and the children’s father told the Dallas Morning News.

Woo’s husband didn’t report her missing until 48 hours after she didn’t come home because according to him, he thought he needed to wait a certain amount of time to file a missing persons report.

A full autopsy is being conducted.