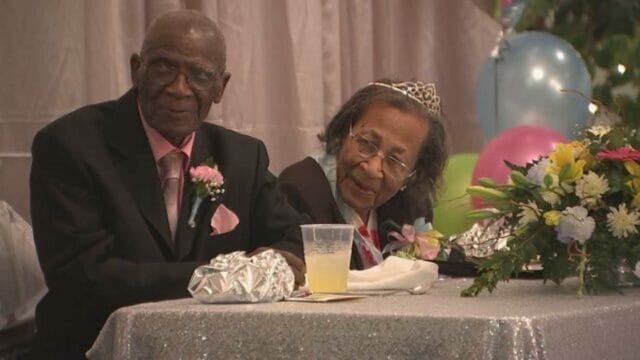 Willie and D.W. Williams have a lot of life (and a lot of love) under their belts.

On Sunday, D.W., 103, and his wife Willie, 100, celebrated not only their birthdays—which are just seven days apart—but a staggering 82 years of marriage.

Related: Your Genes Play a Role in How Happy Your Marriage Is

According to WSOC-TV, their daughter and granddaughter, BJ Williams-Greene, marked the trifecta of milestones by throwing the centenarian couple one big party at First Mayfield Memorial Baptist in Charlotte, North Carolina.

“To see them at this age and still doing well, it’s just a blessing to have them here,” Williams-Greene told the local news station.

D.W. and Willie said they remember meeting when cab rides were just 10 cents. Together they have lived through wars, The Depression, and the Civil Rights Era.

But when it comes to keeping their love alive for the better part of a century, they told WSOC-TV that they’re really no big secret.

“Just be nice to each other,” they agreed.

“They are each other’s best friend,” added Williams-Greene.

This story originally appeared on SouthernLiving.com.