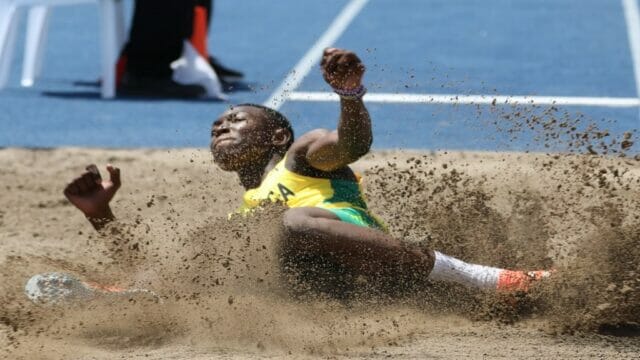 Jamaica increased their medal tally during the morning session on day two of the 49th staging of the Carifta Games at the National Stadium in Kingston on Sunday.

Starting the day with 29 medals, Jamaica added two other medals to the tally after Jaydon Hibbert secured gold in the Boys’ Under-20 long jump and Britannia Johnson claimed silver in the Girls’ Under-20 shot put.

Hibbert, a student at Kingston College, claimed his gold with an effort of 7.72m, which was too good for St Vincent’s Uroy Ryan (7.52m) and Barbados’ Aren spencer (7.48m).

Johnson of Camperdown High School claimed her shot put silver medal with a best effort of 14.19m, which she secured on her second attempt after a foul with her first effort.

Treneese Hamilton of Dominica won gold with an effort of 14.58m. Alicia Grootfaam of Suriname won the bronze with 12.97m.

Cedricka Williams, the other Jamaican thrower, finished fourth with an effort of 12.13m, a day after winning the discus title ahead of Johnson.

Meanwhile, the Jamaican pair of Bryan Levell and Sandrey Davison won their preliminary races of the Boys’ Under-20 200m very comfortable to progress to the semi-finals, which will take place in the evening session.

Nazzio John of Grenada leads all qualifiers into the semi-finals with 21.52 seconds.

Davison’s 21.53 represents the second quickest qualifying time while Levell’s 21.57 is the third quickest.

Jamaica’s Sabrina Dockery leads all qualifiers in the Girls’ Under-17 200m with 21.18 seconds.

Dockery’s teammate Theianna Lee Terrelonge, who claimed the bronze medal in the 100m behind the impressive Adaejah Hodge of the British Virgin Islands on Saturday, has the third-quickest qualifying time going into the semi-finals with 25.09 seconds.

Hodge, the big favourite for the sprint double, is the second quickest going into the semi-finals with 24.19 seconds.

Jamaicans Andrene Peat and Ricaria Campbell are safely through to the Girls’ Under-17 800m final.

Peat qualified for the medal round after finishing second behind Guyana’s Attoya Harvey in heat one of the preliminary round.

Harvey easily secured the victory in 2:15.76 to lead all qualifiers into the final, which is scheduled for Monday’s third and final day.

Peat was just behind in 2:15.79, the second quickest qualifying time.

Campbell secured her spot with a 2:20.06 clocking for second behind Narissa McPherson, another Guyanese, in heat two.

McPherson won the heat in 2:19.89, the third quickest qualifying time.

J’Voughnn Blake remained on course for the Boys’ Under-20 800m/1500m double after easily qualifying for the 800m final.

Adrian Nethersole, who closed a one-two finish for Jamaica in the 1500m, is also safely through to the 800m final.

Nethersole clocked 1:55.89 for third place in his heat. Nirobi Smith Mills of Bermuda took the heat in 1:55.11 to lead all qualifiers into the final.

Nethersole’s 1:55.89 is the third quickest qualifying time while Blake’s 1:58.31 is the slowest going into the final.

Jamaica are hoping to better their 2019 performance in the Cayman Islands when they amassed 85 medals (36 gold, 33 silver, and 16 bronze) to win the Carifta Games for the 35th straight year.

The victory for Jamaica when the Games were last held in 2019 also means that in the 48-year history of the championship, the country has topped the medal table 43 times and its last defeat was in 1984 when The Bahamas won at home.