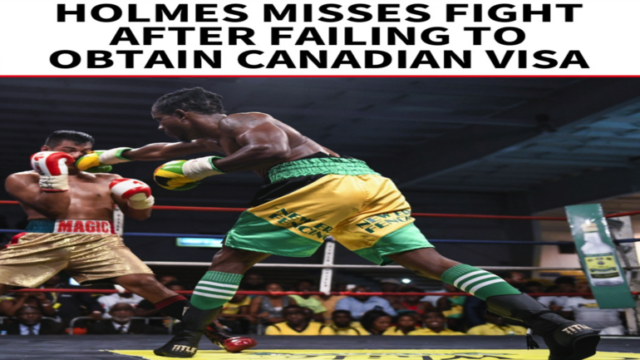 Boxer Richard Holmes is bitterly disappointed after missing his welterweight contest against Josh Wagner at the CAA Centre in Brampton, Canada, last Saturday because of visa delays.

Holmes had trained relentlessly for more than two months and had high hopes of a glorious resumption to his career after being sidelined from the sport for more two years due to the COVID-19 pandemic.

However, up until last Thursday, the deadline for his departure, his handlers had not received word from the Canadian High Commission on the status of his visa application.

“Basically, the visa was the problem. They didn’t grant me the visa on time. That was the major issue.

“I was set to go up from two weeks before the fight. I thought the process was going well and things were in place, so I don’t know where it went wrong,” Holmes told STAR Sports.

“I was really looking forward to it and a lot of overseas fans who were planning to be there were also disappointed. Everything was just frustrating that day, and I got agitated more and more as the time drew closer., because knowing I did so much work and it was not going to pay off.

“I was in very good shape. I was ready and I am just sorry I didn’t get to participate,” he stated.

Although still unclear why his visa was not granted, Holmes revealed there will be another opportunity in a few months and he intends to be personally involved in the visa application process to ensure there are no loose ends.

“I wasn’t given an official reason, I wasn’t really dealing with the whole thing. Somebody took care of that for me, so I really don’t know what took place.

“There will be another opportunity right around the corner. Sometime in July or September, I will be looking towards another fight overseas but the date has not been finalized.

“I am certain it will happen and next time around, hopefully, things will work out the way they are supposed to.

“But I will be taking care of things personally next time around and I hope to be there (in Canada) to put on a show,” he said.

Holmes has a record of 19 wins and five losses. He was the Wray and Nephew Contender finalist in 2018 but lost to Canadian Ricardo Salas.