Home News Global News Man Explains How He Climbed 15 Floors to Save His Mom From... 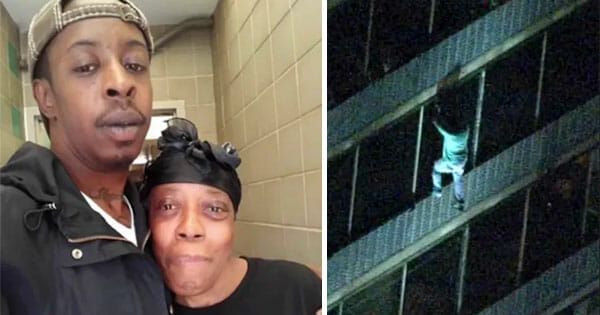 Jermaine and his mom

Philadelphia, PA — A 35-year old man only identified as Jermaine said he would do anything to save his mother, even if that means he has to climb a 19-story apartment building blazing with fire. He was caught on video doing the dangerous stunt in an attempt to rescue his 65-year old bed-ridden mother who was trapped on the 15th floor.

Last Thursday, the Westpark Apartments at Holden Street in West Philadelphia started filling with smoke. When Jermaine received a call from his sibling informing him that their mother, Sheila, couldn’t get out, he immediately went to the scene.

Jermaine first tried to enter through the front door, but the police wouldn’t allow him to.

“They said the elevators are not working. I said, ‘No problem. I’ll take the steps. I just want to make sure my mother – my mother is sick, she’s bed-ridden. So I need to get up there,” Jermaine told ABC 7. “They were like, ‘We can’t let you in.’ I took it upon myself because that’s my mother. There’s no limits. That’s my mother.”

Jermaine, who had experience scaling walls as a roofer, construction worker, and an adventurous child, didn’t give up and decided to climb the building with wire cutters in hand. Earlier that day, he cracked his hip after falling on a set of stairs but his injuries didn’t stop him.

“When I grabbed a gate, at the top of the gate, there was a ledge. Then I could step on top of the ledge and reach up to the other gate, and keep climbing my way up,” said Jermaine, who was familiar with the building’s layout since he lived there before.

When he reached his mother’s balcony on the 15th floor, his mother assured him that she is alright and that the fire was contained. She didn’t scold him for climbing the building, instead, “she was more shocked. She’s not surprised by the things that I do for her. She knows I’ll go over and beyond for her.”

Jermaine then climbed back down the building and thought he would be arrested for what he did. But an understanding officer let him go.

“He told me if I didn’t leave I was going straight to jail. Because that was his job. But, he actually did cut me a break. He understood the circumstances, he knew – when your adrenaline is pumping, and your mom is up there, you think she’s dying – you’d do anything you can,” Jermaine said.

Moreover, Jermaine’s mother, as well as the other residents, made it out safely. Four residents and three firefighters had to be treated due to smoke inhalation.

Jermaine, who actually tried to apply to be a firefighter once before but wasn’t accepted, said he would definitely stop at nothing just to make sure his mother was safe.

“All for my mom’s safety, period. I wasn’t worried about mine at all,” he said.