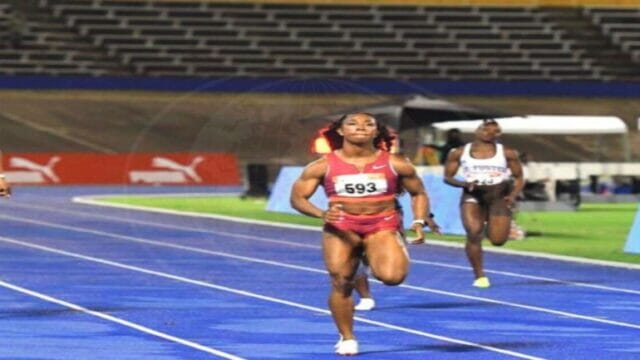 KINGSTON, Jamaica — Looking in immaculate form Shelly-Ann Fraser-Pryce threw down the gauntlet in the women’s 200m stopping the clock at 22.54 seconds as she tried hard to contain herself from running much faster. She was quickest into the final as Olympic champion Elaine Thompson-Herah eased to 22.68 in winning semi-final one while Shericka Jackson won semi-final two in 22.85.

100 champion Yohan Blake also looked good as he eased home in 20.20 and looked to be nearing his best. Andrew Hudson of Empire Athletics made Blake work a little bit more than he wanted and was second in a very good 20.23. Rasheed Dwyer won his heat in 20.35 ahead of Nigel Ellis with 20.45 and Antonio Watson in 20.74. Mario Heslop won the first heat in 20.52

Kingston College’s Adrian Kerr clocked 21.25 seconds in an easy fashion and enters the boy’s Under-20 200 metres with the fastest time in winning the semi-final one while 100m champion Sandrey Davison won the other semi-final in 21.47.

Tia Clayton of Edwin Allen was quickest into the girl’s 200m final, stopping the clock at 23.85. Hydel’s Alana Reid with 24.00 was second fastest ahead of Abrina Wright of Holmwood Technical with 24.03 seconds.