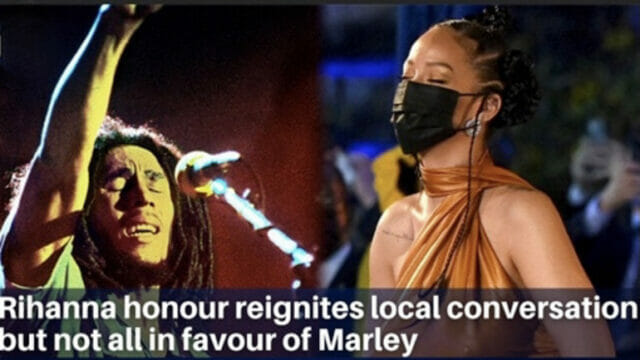 The Barbados government announced on Monday, at an event welcoming its new status as a republic, that pop star and business mogul Rihanna is now the island’s 11th national hero. Even as congratulations have been flowing across social and traditional media, the conversation about Bob Marley being made a national hero by Jamaica has resurfaced.

“I didn’t realize that there was so much momentum behind this conversation about Bob Marley being made a hero, but I am not surprised,” said Jackie Knight, who was commissioned by the Marley family, from before 2005, as a public relations consultant on a project for the reggae icon to be made a national hero.

Formal letters were written on behalf of the Marley family by Knight to the then governor-general of Jamaica, as well as the Ministries of Tourism and Culture, asking them to consider conferring national hero status on Marley. There was a proposal for a national holiday on the reggae king’s birthday on February 6, similar to Martin Luther King’s birthday in the United States, and also for the month of February to become a celebrated month, dubbed Reggae Month.

A press release from Heartbeat Records, dated February 4, 2005, stated in part: “Jamaica’s Prime Minister P.J. Patterson has stopped short of saying whether reggae’s legend Robert Nesta Marley, who would have been 60 on Sunday, will be awarded the status of a national hero. The call for the conferring of the status on Marley has been made by his foundation, which has been celebrating the icon’s birthday in a major way in Ethiopia this week. He credited Bob Marley for being the first Jamaican artist to achieve international superstardom and ‘whose message of peace and love, in the face of formidable social and political challenges of the African people and their descendants, continues to have resonance in our hearts and minds.”

MEDIA FRENZY
Knight recalled that after the project was officially launched, there was a frenzy of media coverage from around the world.

“However, the conversation in Jamaica developed into all kinds of debates, and the Marley family got discouraged and said they didn’t want the legacy of their father to be embroiled in all kinds of debate. Ethiopia reached out to Mrs. Marley and offered to rebury his remains in that country,” she said.

However, while Knight is gungho at any suggestion of Marley being made a national hero, renowned psychologist Dr. Leahcim Semaj, who delivered a Bob Marley Lecture at The University of the West Indies titled ‘Should Bob Marley be Made a National Hero’ during that period, is against it.

“My answer then was an emphatic ‘No’,” Semaj told The Gleaner.

“Look at how our first national hero, Marcus Garvey, is treated. He has an extensive body of literature that is not taken seriously. We trot it out on birthdays and anniversaries, and that’s it. So, if Marcus Garvey, with the most documentation, is not taught in schools, and his policies and principles are not implemented, then what would happen with Bob Marley?” Semaj quizzed.

He stated that it would be nothing more than “an act of exploitation,” based on the Marcus Garvey blueprint. He also noted that Marley’s music is already being used in advertisements for the country’s tourism sector.

Semaj added that conferring national hero status on the music legend would be a demotion.

“Bob Marley is an international icon, and making him a national hero would be trying to tie him down,” he contended.

Strolling down memory lane, the founder of Above or Beyond said he could recall a time when Bob Marley didn’t find favour in Jamaica.

“Marley was banned from the premises of a particular radio station. His music was also banned. When one station had three of his songs in its Top 10, that station, whose name I will not call, didn’t have any. I have lived through this, and I don’t forget it. My views have not changed since I gave that lecture. Conferring national hero status on Marley would be an exploitation and a demotion,” Semaj said.