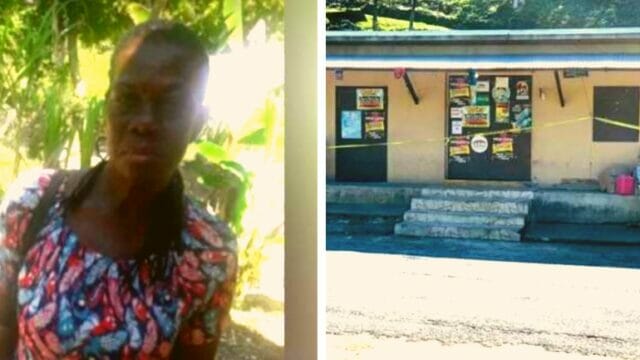 WESTMORELAND, Jamaica — Wednesday’s robbery that took the lives of Westmoreland businesswoman Sophia Brown and her customer Bernie Lewis was the 11th time the store was being hit by thieves.

READ: Two women shot dead in Westmoreland
On Thursday, Brown’s grief-stricken relatives struggled to make sense of her death even as they spoke of her resilience in the face of previous robberies at her Longhill shop in Westmoreland.

Among those grieving is her daughter Tiffanie Turner who heard the gunshots that took her mother’s life. She said she was nearby at her aunt’s house when they heard explosions and shouts coming from the direction of the shop.

They both ran to the shop and discovered that both women had been shot.

Paulette Brown, the sister of the deceased, told OBSERVER ONLINE that she transported her sister to the hospital and also witnessed her last breath.

“It’s terrible to know she lost her life like this,” said a distraught Brown.

Her sister, she said, had been a polite, hardworking woman who “don’t trouble a soul”.

Also grieving is Lewis’s common-law-husband Wilton Myrie. He also heard the shots that took the women’s lives. He was in the shop’s storeroom.

“I was in the shop packing up some goods and I only hear gunshot hit,” Myrie said, adding that when he emerged he found both women face down on the ground.

He said he and Lewis were on their way back from working on their farm when they decided to stop by the shop to purchase items and also help the owner stockpile her goods.

Myrie said Lewis, who he has been with for over 50 years, was a good, hardworking woman.

“When I saw her yesterday, I shed whole heap a eye wata,” he said.

Geraldine Brown, the mother of the now-deceased businesswoman is calling on the government to reinstate the State of Emergency.

“The place want back the soldiers; tight security we need,” said the elderly woman, who said the soldiers assigned to patrol would always check on her daughter when they were close. They had been stationed at the entrance of the community.

“Mi nuh mind if them can catch [the killers],” said a mournful Brown.